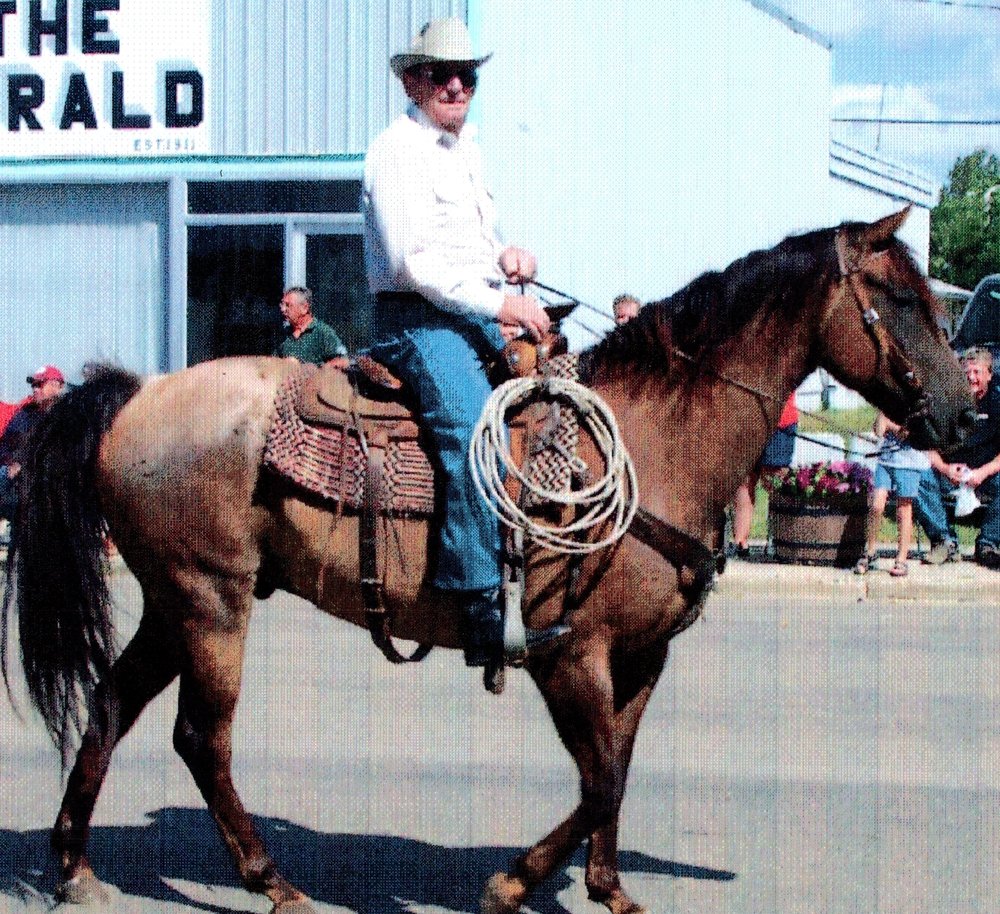 Please share a memory of Harvey to include in a keepsake book for family and friends.
View Tribute Book
JAHNKE - Harvey Theodore, age 101, husband, father, grandfather, great-grandfather, and great-great-grandfather, passed away on November 25, 2020 in the Swift Current hospital. He leaves to remember him his wonderful wife of 10 years, Mona Schultz; his children Norlaine (Wes) Voth, Ted (Marilyn) Jahnke, Allan Jahnke, Deborah (Ed) Reimer and David (Judy) Jahnke and his daughter-in-law Lorna (Rod) Jahnke; and many, many grandchildren, great-grandchildren, and great-great-grandchildren. He is also survived by his siblings Ruth Blakie, Curtis, Lorene Harrison, Virgil, and Genevieve Jackson; and by his in-laws Katherine (Art) Jahnke, Helen (Lawrence) Jahnke, Tillie (Curtis) Jahnke, Paul (Irma) Webb, Bob (Lorene) Harrison, Phyllis (Virgil) Jahnke, Philomene (Gordon) Jahnke and Barry (Genevieve) Jackson. He was predeceased by his first wife, equally wonderful, of 55 years, Ruth (nee Epp), his son Rod (Lorna) Jahnke, his daughter-in-law Valerie (son Allan's wife), his "adopted" son, Derick de Vere, his parents Gus and Sadie (nee Wiens) Jahnke, his siblings Art, Lawrence, Albert, Irma, Lois and Gordon and his in-laws Elma (Albert) Jahnke, Al (Ruth) Blakie, and John (Lois) Wallin. Harvey was born near Main Centre, Sask. in 1919 and grew up on the family farm there and at nearby Herbert. He completed his schooling in Herbert and worked on the family farm after that. He was a conscientious objector in the second world war resulting in time spent in northern Saskatchewan building roads. He married his first wife, Ruth, on October 24, 1945. They spent their early married years on a sheep ranch north of Tompkins, Sask. (with his brother Lawrence and his wife Helen) and on a farm just south of Herbert. In the early 1950's they moved to Harvey's parental home just west of Herbert where Harvey and Ruth resided together until her passing in 2001. Harvey continued to reside there until his marriage, at the age of 91, to Mona Schultz on September 4, 2010. They resided together in Mona's home in Herbert until March of 2018 when they took up residence at Riverview Estates in Swift Current, living there until his admittance to hospital on November 19, 2020. Harvey and Ruth raised their six children for the most part on the family farm two miles west of Herbert. Harvey was a lifetime farmer and never truly retired. He loved his family, work, and horses, celebrating his 100th birthday with a ride at the farm with many of his family members. He and Ruth brought the family up in the Herbert Mennonite Church and instilled in their children the work ethic so common in rural Saskatchewan. He was proud of his children and the careers they pursued. His goodbyes always concluded with the guiding words "work hard". Harvey took an active role in his church, the Herbert Nursing/Invalid Home (now the Herbert health facility) and the rural telephone company, both as a leader and as a worker. He was gifted with many talents. In his later years he and both his spouses, Ruth, and Mona, travelled often to warmer climates in the winter months - southern USA, Puerto Rico, Australia, Mexico, Brazil, Hong Kong, and southeast Asia (mainly Thailand). He enjoyed much time with his youngest brother Gordon in California and Thailand. He continued to be actively involved at the farm with his son Allan until his marriage to Mona, at which time he took up residence with her in Herbert. They enjoyed a wonderful relationship until his passing. Donations in memory of Harvey Jahnke can be made to the Canadian Food Grains Bank or to the charity of your choice.
To plant a beautiful memorial tree in memory of Harvey Jahnke, please visit our Tree Store

Look inside to read what others have shared
Family and friends are coming together online to create a special keepsake. Every memory left on the online obituary will be automatically included in this book.
View Tribute Book
Services for Harvey Jahnke
There are no events scheduled. You can still show your support by planting a tree in memory of Harvey Jahnke.
Plant a tree in memory of Harvey

Share Your Memory of
Harvey
Upload Your Memory View All Memories
Be the first to upload a memory!
Share A Memory
Plant a Tree