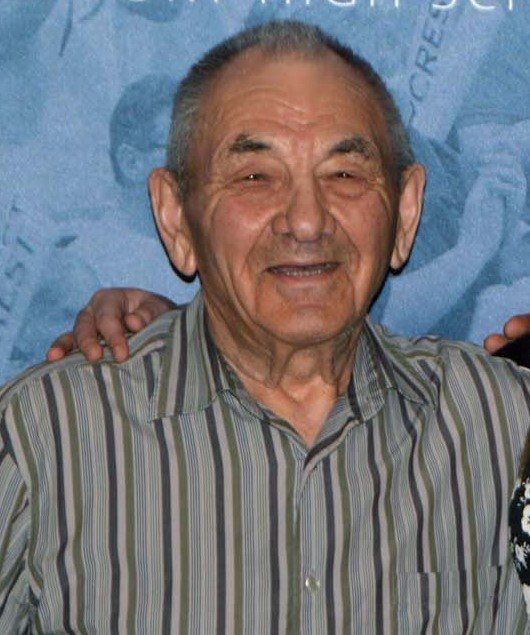 Please share a memory of Cornie to include in a keepsake book for family and friends.
View Tribute Book
BUTE - F. Cornelius went to be with his Lord on September 15, 2020. Cornie was predeceased by his parents Frank Bute in 1985 and Elizabeth in 1997, his wife Mary in 1992 and his wife Myrtle in 2016. He is survived by his children Carrie (Vern) Peters, Brian (Eveleen) Bute and Ron (Kathleen) Bute; grandchildren Chris (Andrea) Peters, Amy (Randy) Melvin, Brad (Ang) Peters, Brianna (James) Miller, Kieran Bute, Camron Bute, Angela (Jon) Nieradka, Deanna (Marc) Glasgow, Reuben Bute; great grandchildren Ethan Peters, Ellie Peters, Elayna Melvin, Blake Melvin, Dexter Nieradka and Blake Nieradka; sisters Ida Harris, Margaret (Vernon) Moore, Helen (Dennis) Paterson and Ruth (Les) Babcock; brothers-in-law John Brownell and James Brownell; and sisters-in-law Beryl Henne and Edith (Lyle) Doell. Cornie was born October 29, 1934 on his Kovach grandparents’ farm in the Forest Edge District near Kipling, Saskatchewan. He grew up in that area until the family moved to a farm near Wawota, Saskatchewan in 1949. His first language was Hungarian. He knew very little English when he started school. Cornie’s Christian faith was always extremely important to him. He accepted the Lord as his saviour at age 11 and was baptized at age 13. Past times for him were focused on church and volunteering at faith-based organizations. He was instrumental in starting Kenosee Lake Bible Camp and the Wawota Alliance Church. He volunteered with Kenosee Lake Bible Camp, Teen Challenge, Wawota Alliance Church, Cypress Bible Camp, Gideons, West Bank Bible Camp, MCC Furniture, Meals on Wheels and Salvation Army Foodbank. At age 84 he was still volunteering at DVBS and MCC Furniture until that became too physically demanding. He continued at the Salvation Army Foodbank until age 85. Initially, he obtained a grade 8 education. After that, he attended Briercrest Bible Institute for a year and a half before he contracted rheumatic fever. On recovery he returned to the farm to work with his father. He took grade 9 by correspondence after returning to the farm. On July 16, 1959, Cornie married Mary Brownell. They lived on the farm that was his parents. They raised their family on this farm and continued to live there until Cornie and Mary moved to a house in the town of Wawota in 1985. After Mary’s passing, Cornie continued to farm in the Wawota area until 1993. In that year, he moved to Saskatoon and married Myrtle. As with a lot of farmers, he continued to lease out his cattle and worked for various farmers while living in Saskatoon and Swift Current. He still wanted to remain a farmer. In 2006, Cornie moved to Swift Current to be closer to his daughter, Carrie. Myrtle had also moved into long-term care in Swift Current. Cornie continued to provide care for her and feed her on a daily basis until she passed away in 2016. A family graveside service will be held on Friday, September 18, 2020 at 1:30 p.m. at Meridian Cemetery, Wawota, SK. A celebration of life service will be held on Saturday, September 26, 2020 at 2:00 p.m. at Trailview Alliance Church. Donations in memory of Cornie can be made to the Gideon’s International or to the Salvation Army Food Bank, Swift Current. The service will be livestreamed and the link will be posted prior to the service on www.swiftcurrentonline.com and on Parkside Memorial Funeral Home Facebook page. For further information visit www.parksidefuneralhome.com Arrangements are in care of Parkside Memorial Funeral Home – Ryan Cappelle & Hayden Cappelle. The livestream link of the service is posted on his funeral announcement page at www.swiftcurrentonline.com or on our Parkside Memorial Funeral Home Facebook page.
To send flowers to the family or plant a tree in memory of Cornie Bute, please visit Tribute Store
Saturday
26
September

Share Your Memory of
Cornie
Upload Your Memory View All Memories
Be the first to upload a memory!
Share A Memory
Send Flowers
Plant a Tree