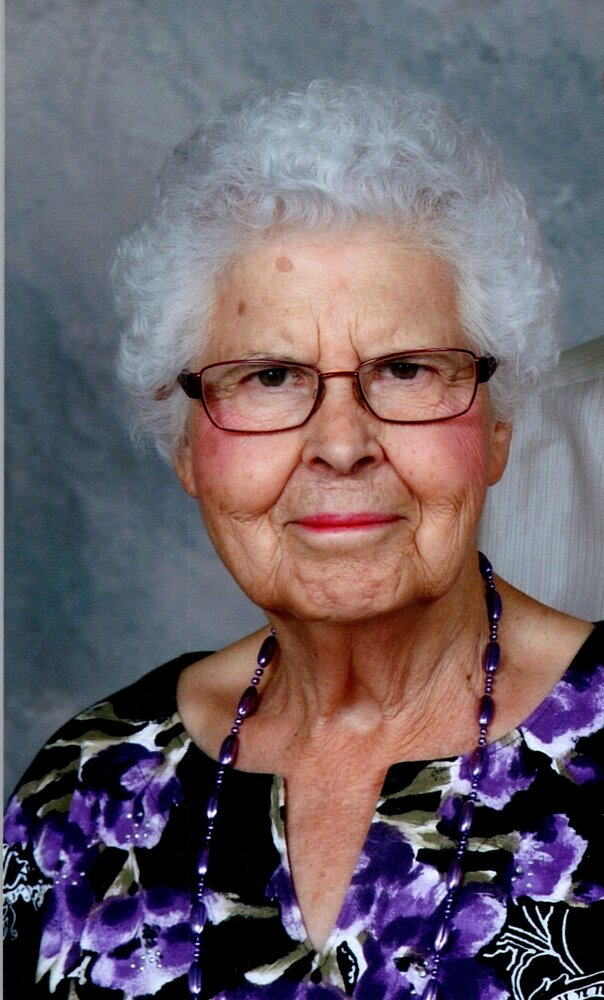 Please share a memory of Lucille to include in a keepsake book for family and friends.
View Tribute Book

The family of Lucille Sorensen is saddened to announce her passing on December 27th, 2022 at the Meadows Long Term Care Home in Swift Current.  She was 88.

Lucille Lee was born March 27th, 1934 in Saskatoon and grew up on the Lee family farm near Sceptre, Sk. She was the youngest of eight children. After graduating Grade 12 she worked in the Sceptre post office for one year before moving to Swift Current to attend the business school.  It was in Swift Current where she met Bernard Sorensen and they later married, on February 2nd, 1957.

Daughter Karen was born in April 1958 and Son Don in October 1960. Once Bernard and Lucille’s children were in school, Lucille returned to work.  Initially she worked for the Saskatchewan government Department of Natural Resources, and later for Service Canada.

Lucille always kept very busy outside of the home and was generous with her time. She was heavily involved in the First United Church UCW, as president, unit president, with the Presbytery and the Church Council.  Lucille was always willing to usher, serve, organize teas, or drive those who were unable. Lucille always had a smile on her face and was happiest when helping or connecting with others. She volunteered much of her time at the United Church Rummage Sale room, for meals on wheels, and for many years with the SPCA bookstore. We also learned, later in Lucille’s life, that she was involved years earlier in women’s rights groups in the Swift Current area. She was also a strong supporter of the work of Amnesty International, where her involvement took her to Toronto, to attend a conference in 1981.

Lucille always was an avid traveler.  Her ongoing desire to learn more about different places and people took her all over the globe.  Her love of travel started young, as she made multiple trips to visit siblings in California.  Lucille, Bernard and their children took their first trip to Hawaii, in 1969. She travelled extensively through the United States and Canada over the years to keep in touch with relatives, and took a trip on her own as a younger woman, throughout Europe, with a Euro Rail train pass.  She was fearless.  When Lucille retired from Service Canada, she and Bernard travelled during the winters back to Hawaii, Kelowna, California and Mexico.  Her adventuring didn’t stop then, as her interest in learning about the world continued with age.  She participated in many trips with the Elderhostel organization, venturing to Australia, New Zealand, Cuba, Dominican Republic, and in the United States to see Washington DC, Texas and Missouri.  She was open to new experiences when she traveled and was never fussy. She was just glad to be there.

Lucille was determined.  After her children were grown, she pursued a Bachelor of Arts degree at the University of Regina. She commuted back and forth from Swift Current to Regina for three years, completing her degree at the age of 59.  It was a great accomplishment for Lucille, which her family too, is very proud of.

Lucille found great joy with her family, and as a grandmother and great-grandmother. She was fortunate to have two of her grandchildren grow up near her in Swift Current.  Bernard and Lucille enjoyed taking the grandchildren on camping trips to Cypress Hills in the summer, out for suppers, or to volunteer shifts at the SPCA bookstore. As Lucille was excellent at maintaining relationships, it was not difficult for her to stay connected to her grandsons who lived in BC.  She would host them in the summers, and she would visit them on the west coast as often as she was able.

Lucille had friends of all ages and from many different backgrounds.  She could engage in conversation easily, and she was always up for tea (with milk) and to have a visit.  She valued her close friendships, like they too, were family.

Lucille’s family is deeply saddened by her passing but find comfort knowing she is at peace, rekindling old friendships and making new ones. She will be deeply missed, and we will cherish our memories of her forever.

A memorial tea will be held at First United Church in Swift Current on January 16th from 2pm- 4pm.

Anyone wishing to make donations in Lucille’s name may do so to the SPCA Swift Current or Alzheimer Society Saskatchewan, to further research.

To send flowers to the family or plant a tree in memory of Lucille Sorensen, please visit Tribute Store
Monday
16
January

Share Your Memory of
Lucille
Upload Your Memory View All Memories
Be the first to upload a memory!
Share A Memory
Send Flowers
Plant a Tree