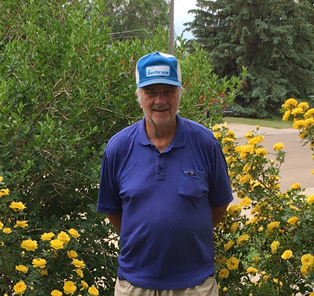 Please share a memory of Carl to include in a keepsake book for family and friends.
View Tribute Book

PARCHMAN – Carl William was born in Lafleche, Saskatchewan on November 25, 1938.  He passed away at the Cypress Regional Hospital in Swift Current on January 3, 2023, after a brief illness.  Carl was predeceased by the love of his life, his wife of 48 years, Beth Parchman; his parents, William and Esther Parchman; his parents-in-law, Jack and Lucy Crozier; his siblings, Dorothy Parchman, Elmer Parchman, Howard Parchman, and Wilma Bourlon; brothers-in-law, Clifford Crozier, Alvin Crozier, Rudy Walker, Bill Carlson; sisters-in-law Norma Walker, Rose Parchman, Hazel Crozier, Evelyn Carlson, Betty Crozier; infant granddaughter, Amanda Davis; and nephews David Reid, Kelvin Walker, Ron Crozier, Murray Crozier, Donald Reid, Chris Parchman and Art Crozier.  He is survived by his daughter, Melanie (Mike) Davis; grandsons William and Zachary Davis; his sister, Lorraine Blakely; sisters-in-law, Dolly Crozier, Wynn (George) Reid, Carole Parchman; brothers-in-law, Ray Bourlon, Ken Crozier, Milt (Peggy) Crozier; as well as numerous nieces, nephews, their spouses and children.  Carl was raised on very little money by very hard-working parents.  It was the “Dirty Thirties” and farming wasn’t working out for the Parchman family, so Carl’s dad got a job on the CPR section.  They followed the job around the area (Fir Mountain, Pambrun, Cadillac).  In 1955, they moved to Swift Current and Carl began working for the CPR—first as a Call Boy for $140.62 per month, then as an apprentice Carman.  Carl met Beth in the early 1960s when he was helping his friend George Reid build a house.  At the time, Beth was living with the Reids (her sister Wynn and husband George).  In Carl’s words, “I chased her ‘til she caught me”.  Carl and Beth were married on May 21, 1966.  On their wedding day, Carl had the mumps and had just been laid off from the CPR.  They started married life in what they referred to as “a little hole in the wall” upstairs suite that they rented for $55 per month.  Carl soon got another job, driving a fuel truck for Esso, and in December 1966, they bought the house that would be their home together for the next 42 years.  Those 42 years were spent working, raising their daughter, taking camping trips throughout the province, enjoying time at family gatherings, and puttering in their yard.  Carl worked for Esso until 1972, then went to welding school and worked as a welder in Regina for a few months, before returning to Esso in Swift Current where he remained until semi-retiring in about 1991.  In the years after, he worked part-time for Superior Service Station Maintenance, as well as helping Beth look after their grandsons when Melanie returned to work after her maternity leaves.  When William and Zachary got jobs delivering the Southwest Booster, Carl would pick up the papers, pick up the boys from school and help them with their route.  Always being good with numbers, he’d easily keep track of how many houses were on each side of each street of each block on the route, and would load up the carts with the required number of Boosters for each of the boys.  Carl could fix or build seemingly anything.  He built their garage, a greenhouse for Beth, concrete borders around all of the flowerbeds in Melanie & Mike’s yard, and, Melanie’s favourite:  a beautiful rock wall across the back of their backyard.  Carl & Beth’s happy life of simple pleasures changed dramatically in October, 2008, when she broke her neck in a freak-accident.  Her body was broken, but her mind, spirit, personality and sense of humour remained intact.  Immediately after her accident, Carl moved to Regina and spent every day by Beth’s side, providing much of her hands-on care.  After she was moved from the General Hospital, to the Wascana Rehabilitation Centre, they would tour around inside and outside, and occasionally over to see the flower beds at the nearby Legislative Building.  Under Beth’s supervision, Carl would fill Wascana’s planters with flowers and tomato plants.  Carl & Beth’s love for and devotion to one another was and is truly inspiring.  After Beth passed away in 2015, Carl returned to their house in Swift Current.  Zachary, who had been renting the house, continued to live with his grandpa for approximately four years—an arrangement that was very good for both of them.  Carl began to have memory issues a couple of years ago, then was diagnosed with cancer in January 2022.  Thanks to radiation treatments, medication, Home Care, meals-on-wheels and Melanie’s daily visits, he was able to remain in his house right up until a week before his passing.  Melanie will always be grateful for the extra time she was able to spend with her dad.  In memory of Carl Parchman, donations made to the Canadian Cancer Society or to the Swift Current SPCA would be appreciated by the family.  A memorial service will be held in the Spring.  Carl’s family would like to thank Parkside Memorial Funeral Home, Swift Current, Saskatchewan, for their care and attention.  To sign the family book of condolences, visit www.parksidefuneralhome.com. Arrangements are in care of Parkside Memorial Funeral Home – Ryan Cappelle & Hayden Cappelle.

To plant a beautiful memorial tree in memory of Carl Parchman, please visit our Tree Store

Look inside to read what others have shared
Family and friends are coming together online to create a special keepsake. Every memory left on the online obituary will be automatically included in this book.
View Tribute Book
Services for Carl Parchman
There are no events scheduled. You can still show your support by planting a tree in memory of Carl Parchman.
Plant a tree in memory of Carl

Share Your Memory of
Carl
Upload Your Memory View All Memories
Be the first to upload a memory!
Share A Memory
Plant a Tree