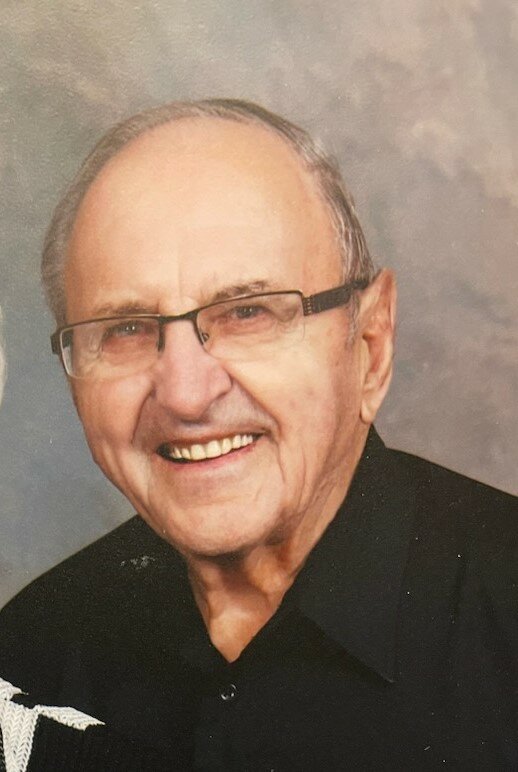 Please share a memory of Leopold to include in a keepsake book for family and friends.
View Tribute Book

Haack, Leopold (Leo) - It is with heavy hearts that we announce the passing of our beloved father, Leo on December 4, 2022 in Swift Current, SK. Leo was born on August 24, 1932 on the homestead north of Meyronne to John and Annie (Mulatz) Haack.  He is survived by his four children, Dean (Darcy) and their children, Rachel (Scott), Tiffany (Evan) and Jeremy; Gary (Carmen); Corinne (Aaron) and their children Nickolas and Rebecca; Tracy and her children Jaylyn (Josh) and Brady. His sisters Irene Therens and Maryanne Vallely. His sister in-laws and brother in-laws, Delores Haack, Bernadette (Gilles) Soucy, Carolann (Mel) Buehler, and Valerie Brooks, Len Johnson and John Desjardins.  As well as many nieces and nephews.  He is predeceased by his wife, Marilyn, his parents, John and Annie Haack, his brother Bob, his sisters and their husbands, Florence and Don Endicott, Marlene Eisenkrien, Kathleen and Cliff Sterling and brother in-laws Ronald Chase, Doug Therens and Garth Vallely.  His in-laws Adam and Frances (Janiskiewicz) Bolen and their children, Eileen and George Wilhelm, Delores Johnson, Geraldine and Ed Soder, Lorraine Bolen and Sharon Desjardins. Leo attended Kramer School for Grades 1-8, Meyronne Separate School for Grades 9-11 and Campion College in Regina for Grade 12 and an additional year of Arts and Engineering.  Growing up, Leo was very active in sports, he played hockey, baseball, rugby, and curled.   He bowled throughout his adult life.  After two years in Regina, he decided city life was not for him and returned home in 1952 to farm with his father.  On October 8, 1962 he married Marilyn Bolen and they raised their four children on the family farm. Leo enjoyed having a mixed farm and its challenges.  He was proud to be on the farm for its Centennial.  In later years, Leo farmed with his son Dean, finally retiring in his mid-80’s. Leo was an active volunteer throughout his life, he always said, if you want something done, you must go to the meetings.  He served on the Glen Bain RM as Counsellor and Reeve, during his time there he had an impact on bringing 911 to Saskatchewan.  He was a director for the Southwest Transportation committee on behalf of many local RM's.  In the local community, Leo was director, then President of the Meyronne Credit Union, on the Meyronne Co-op Board, Meyronne Fire Board and was part of the committee to build the bowling lanes onto the Meyronne Hall.  Leo was an active member of the Knight of Columbus and the treasurer for St. Elizabeth Church for many years. When he and Marilyn moved to Swift Current in 1990, he was an active part of the Catholic Community in Swift Current.  Leo enjoyed spending time with family and friends, traveling, playing cards, completing puzzles and crosswords. In his younger years, he enjoyed singing and playing guitar. He will be remembered for his leadership, his smile, his integrity and his kind nature. In lieu of flowers, memorial donations in Leo’s memory can be made to the Christ the Redeemer Building fund at ctrparish.com. Leo’s funeral service will take place Friday, December 23 at 2:30 pm at Christ the Redeemer Church. Funeral arrangements are in care of Parkside Memorial Funeral Home – Ryan Cappelle & Hayden Cappelle.

To send flowers to the family or plant a tree in memory of Leopold Haack, please visit Tribute Store
Friday
23
December

Share Your Memory of
Leopold
Upload Your Memory View All Memories
Be the first to upload a memory!
Share A Memory
Send Flowers
Plant a Tree