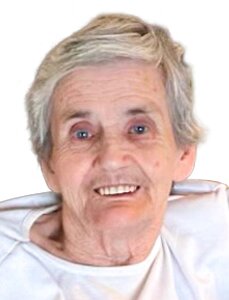 Please share a memory of Esther to include in a keepsake book for family and friends.
View Tribute Book

BEISEL - ESTHER, passed away on September 28th, 2022, in Regina, SK. Esther was born in Nixonville  SK.  in northeastern Saskatchewan, near Hudson Bay to Barbara (Erickson). And Leo Jacques. On November 14, 1941. The 3rd child, she was born a twin, her sister was Eythel.  Esther and Eythel’s family started with Stanley, Emil, then the twins. Then Melva, Ervin, Melvin, and Alvin.

Esther is survived by, her sister Melva, and her brother Melvin. Her two sons, Curtis, and Barry. And grandson Steven, nieces Yvonne, Theressa, and Kathy, nephews, Donald, Earnie, Kevin, and Kim. She was predeceased by, her husband Rueben, her parents Barbra and Leo, sister Eythel, brothers Alvin, Ervin, and Emil.

In the year 1954, the family moved from northern Saskatchewan to Tompkins where they attended Tompkins school. Ester met Rueben at the young age of 15.  And they were married when she was 17.

They lived in Tompkins, right next door to Esther’s parents for a while and raised chinchillas. The bottom fell out of the fur trade in the 70’s and Esther’s parents moved to B.C.  At which time Rueben and Esther went to work on the Casey ranch north of Tompkins. Soon    They moved to their own farm close by, until they bought their house in gull lake in 1999. Esther loved the farm life, having the cows and horses around.

Esther Loved hosting family gatherings and had many Christmas dinners at her house. She liked watching old westerns on her DVD player. Esther loved to crochet! She has stacks and piles of doilies in every beautiful colour, she just couldn’t help herself!

A reception to celebrate Esther Beisel's life will be held on Saturday, October 8, 2022 at 2:00 p.m. at the Gull Lake Elks Hall for all her family and friends.

To send flowers to the family or plant a tree in memory of Esther Beisel, please visit Tribute Store
Saturday
8
October

Share Your Memory of
Esther
Upload Your Memory View All Memories
Be the first to upload a memory!
Share A Memory
Send Flowers
Plant a Tree