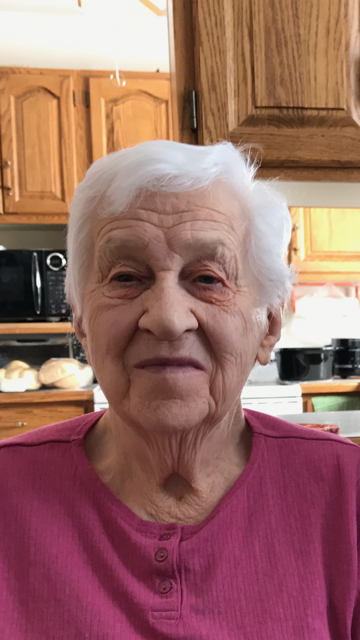 Please share a memory of Mary to include in a keepsake book for family and friends.
View Tribute Book

ENS – MARY went to be with her Lord and saviour on September 19, 2022, while residing at the Meadows Long Term Care Facility.  Mom was born on a farm rented near Rhineland, SK on February 25, 1930, to parents John and Susan (nee Martens) Letkeman.  She attended Flora School in Rhineland. In 1942, the family moved to Biggar and rented a farm.  In 1943 they moved to Swift Current. Mom went to Elmwood School, but left after grade 8. Mom started earning money picking potatoes for Market Gardeners in Swift Current. Later she began washing dishes at a local café. When she wanted to go to choir practice her sister Cathrine would take over washing dishes and after practice she would return to finish her shift. One day she came to work and her boss told her she would now be waiting on tables. She worked at several cafés. Then in 1949 she attended the Swift Current Bible School and there she met Willie Ens from Waldheim, SK. They were married on April 14, 1951. For a short time they worked at McGavin’s Bread Plant in Regina before returning to Swift Current. The first of 7 children was born in 1952. Dad worked at various jobs but in 1959 he and mom purchased the General Store in Burnham and moved there with the 5 oldest children. Business slowed, so they moved to Swift Current in 1966 with their 7 children. In 1971 the family moved to Blumenhof, SK. On the acreage they raised cattle, pigs, chickens, and they grew hundreds of pounds of vegetables. Potatoes ended up on the table, but were also sold to corner stores in Swift Current. Mom’s hard work helped stretch a dollar. In 1988 mom and dad sold the farm and retired to Swift Current. Mom and dad were the original member of the Alliance Church in 1957. Mom liked to read the bible and enjoyed listening to and playing music. She played the violin and autoharp. In later years she had hearing problems and she was legally blind, but Dr. Banks was amazed at how well she could see. She had a keen mind and could remember everyone’s names and birthdays. She had been diagnosed with leukemia but that only slowed her down a bit.

Cook, baker, pickle maker, domestic engineer, bookkeeper, and mother. Her final wish was that all of you would accept Jesus as your personal saviour so that she can see everyone again in heaven. Her story will continue…

To send flowers to the family or plant a tree in memory of Mary Ens, please visit Tribute Store
Saturday
1
October