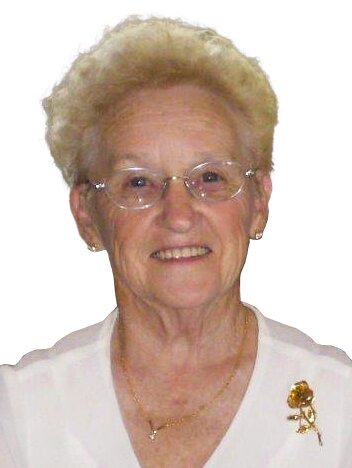 Please share a memory of Hazel to include in a keepsake book for family and friends.
View Tribute Book

Hazel was born November 8, 1927 in Newlands, BC.  She was the 9th of 14 children in her family, and was orphaned at the age of 11 and went to live with a foster family.

Hazel was very active in her community, including farming activities, beautiful flower beds and large gardens, a 4-H leader teaching sewing, cooking, knitting, crocheting, a member of the Lloyd district Women’s institute and the Swift Current Oil Wives clubs for many years.

She also enjoyed many sports and was an avid curler at both the Webb and Swift Current curling rinks, bowling in Swift Current, fishing at Duncairn Dam and the occasional ball game or golfing with Iver. Iver and Hazel loved to dance, attending all the dine and dances around the community, and continued to enjoy music and dancing even when they moved into the Prairie Pioneer Lodge.  It was something Hazel could continue to enjoy even in the early onset of Alzheimer’s.

In the later years Iver and Hazel relocated to Swift Current, where they eventually both moved into the Prairie Pioneer Lodge as Hazel’s Alzheimer’s disease progressed.  They moved to the Meadows when it opened in June, 2016 where they spent their final years together, until Iver passed away September, 2016.

To send flowers to the family or plant a tree in memory of Hazel Rude, please visit Tribute Store
Saturday
8
October

Share Your Memory of
Hazel
Upload Your Memory View All Memories
Be the first to upload a memory!
Share A Memory
Send Flowers
Plant a Tree