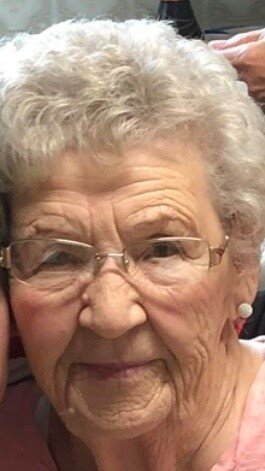 Please share a memory of Dorothy to include in a keepsake book for family and friends.
View Tribute Book

TOUGH – DOROTHY  - It’s with heavy hearts that we announce Dorothy May Tough , 95 years old of Tompkins passed away peacefully at the Meadows Care facility in Swift Current, SK on August 18, 2022 .

Dorothy was born in the Murray Dale district on May 22 , 1927 to George and Amila Willberg . She was one of eight siblings. Shortly there after the family moved to Tompkins where she lived for most of her life.

Dorothy was schooled in the Tompkins area and that and is where she met her future husband Charles Daniel Tough. They were married in June of 1944. They had a total of five children, Marlynn, Sylvia, Daniel (passed at infancy) Debbie and Perry. Dorothy and Charlie lived and farmed in the Bestville district until 1957 when they moved to Tompkins for good. Dorothy took pride in her accomplishments as a wife , mother ,grandmother and great grandmother. Family meant everything to her and when she was not busy doting on them, she indulged in her hobbies , gardening, sewing, crocheting, and playing crib. She cared deeply for community and volunteered for various causes. Dorothy was a lifetime member of the Legion . Also enjoyed her time with her friends at the Tompkins Seniors Club was always a treat.

Dorothy left an impression with everyone she met and was held in high regard by most everyone.

Funeral to take place at Tompkins Community Hall on Wednesday August 24 at 2:00 pm.

Lunch to follow. In lieu of flowers donations can be made to the Royal Canadian Legion, Tompkins Seniors Club or Tompkins Skating Rink.  Arrangements are in care of Parkside Memorial Funeral Home – Ryan Cappelle & Hayden Cappelle.

To send flowers to the family or plant a tree in memory of Dorothy Tough, please visit Tribute Store
Wednesday
24
August

Share Your Memory of
Dorothy
Upload Your Memory View All Memories
Be the first to upload a memory!
Share A Memory
Send Flowers
Plant a Tree