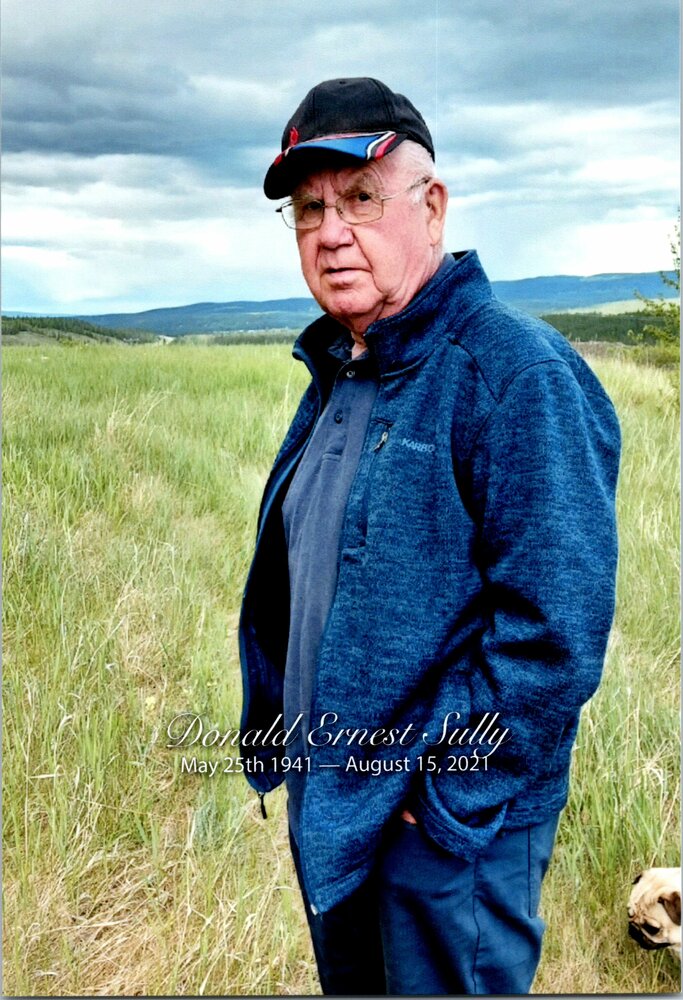 Please share a memory of Sully to include in a keepsake book for family and friends.
View Tribute Book

SULLY – Donald was born in the spring of 1941 at Biggar, SK. He was the third child of Cecil and Rena and would eventually be one of eight children. At the time the family had a small farm outside of Biggar and Donald’s first years of school were at the Vance one room school house. Life on the farm was full of adventure for a young boy and this probably resulted in Donald’s love of nature and outdoor life.

At the early age of sixteen, Donald started work. First as farm laborer and then in construction with the Pioneer Grain Company and work on the Diefenbaker Dam. Always hard work. Later he studied for his Millwright papers and worked at Fort McMurray and across AB and BC at a  number of paper mills.

On August 7, 1964 Donald and Doreen were married and ever after you could not speak one name without the other falling off your tongue. They were inseparable, a team. And not many years later sons Kevin and Kenton were added to the family.

Donald was an outdoorsman. He enjoyed hunting, fishing and camping. He worked hard and he played hard. At a family gathering he was the life of the party with his story telling and feats of strength. When it came to helping others he was always there. If he came to visit he would start to make the rounds fixing appliances and repairs to the home. And there seemed to be nothing that he wasn’t able to set right. You are solely missed Donald.

To send flowers to the family or plant a tree in memory of Sully Donald, please visit Tribute Store
Friday
5
August

Share Your Memory of
Sully
Upload Your Memory View All Memories
Be the first to upload a memory!
Share A Memory
Send Flowers
Plant a Tree