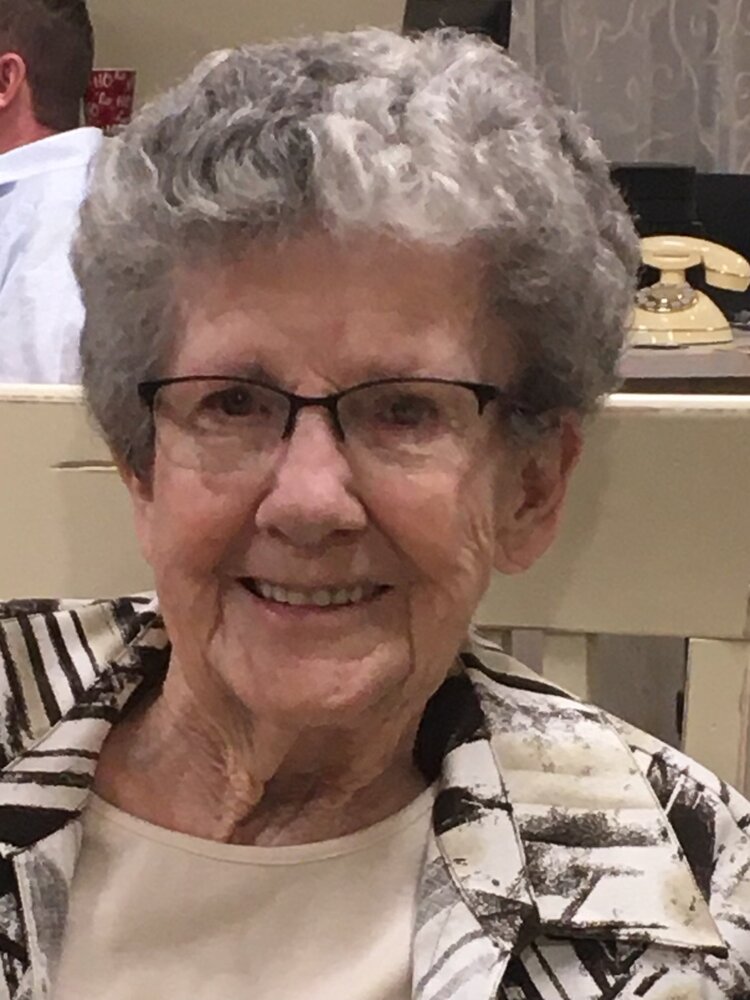 Please share a memory of Pete to include in a keepsake book for family and friends.
View Tribute Book

The family of Pete (Patricia) Day (nee Speir), age 89, of Willow Creek Manor in Swift Current, (formerly of Kyle, SK) are saddened to announce her passing on Saturday, April 9, 2022.

Son Calvin (Joni) and their children Clay (Robyn) and their son Chet, and Brett (Dustyn Dickson); sister Marion Resch, and many nieces, nephews and a few life long friends.

Pete was born in Cabri, SK, on August 17, 1932; the 7th child born to William and Marguerite Speir of the Tyner district.  The family moved to the Sheflo farm in 1934 where Pete grew up.  She attended Clytha School and often told stories of riding to school on Fyvie, a Clydesdale stallion, or behind him in the sleigh.  Coincidentally, 5 of the children could ride Fyvie all at the same time.  Granddaughter Brett and Dustyn Dickson have recently purchased the yard where Pete grew up.

Pete married Raymond Day on June 19, 1950.  They were the first couple to be married in the newly built Lacadena United Church, and then moved 8 miles south of the Lacadena.  They lived, and raised 5 children, on the farm until they moved to Kyle in 1982. Keith and Connie then took over the farming operation and grandson Mitch lives there, today.  Raymond and Pete were active in both White Bear and Lacadena communities, while they lived on the farm.  The family spent many hours at the rink in winter and there were always many visits from neighbours and family; the coffee pot was always on.  Pete was a member of the Lacadena Clytha Ladies and helped make hundreds of quilts over the years.

Pete remained busy once they moved to Kyle and started singing with the United Church choir.  Raymond's health was failing, and he passed away on January 26, 1986 at the age of 59.  Pete decided to stay in Kyle and spent time watching hockey and curling, at the rink.  She had been an avid curler but her arthritis made it impossible for her to partake, other than from behind the glass in the mezzanine.  Grandchildren were very important to Pete and she attended as many of their special events as she could.

Pete bought a small house and moved to Success in 1990.  In the fall, Stan and Sherry needed her help, so she packed a bag and went to stay in Val Marie until Kim was born.  Gramma Pete was there for Leslee's first day of Kindergarten.

Pete served a couple of terms as the Mayor of Success and owned/operated Pete's Place, a postal outlet, small convenience store, and coffee shop.  That was the place to meet, and the locals became her close friends; many days there were more people than chairs and people stood long enough to hear the local gossip, but they wouldn't miss a day.  The grandchildren spent many hours at Gramma’s, playing store.

Pete's next move was to Oyen Alberta to join her sister, Nora, at the Senior’s Lodge.  Sister Beth moved in, as well, a few years later.  The sibling rivalry was back on…but the three of them enjoyed each other’s company and, no doubt, lived some of their best days together over those years.

Pete felt the need to return to her home and took up residence in Southview Apartments in Kyle in 2016.  When her health made it difficult for her to live on her own, she moved to Willow Creek Lodge in the fall of 2019.  COVID soon hit the country and although she enjoyed her time there, there were some lonely times as she missed her children, grandchildren, and great-grandchildren more than anything.  There were many visits on the deck when it was not possible to be close; she enjoyed any time she could spend with family.

To send flowers to the family or plant a tree in memory of Pete Day, please visit Tribute Store
Monday
18
April

Share Your Memory of
Pete
Upload Your Memory View All Memories
Be the first to upload a memory!
Share A Memory
Send Flowers
Plant a Tree