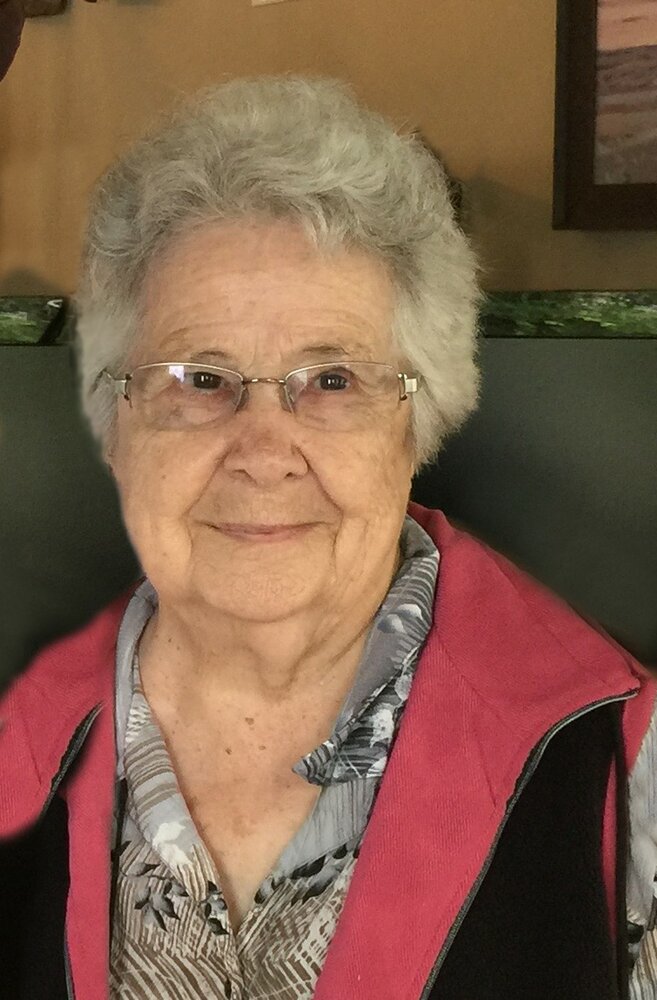 Lorraine Williamson (Ross) passed away on February 25, 2022, at the age of 95. She was born on December 14, 1926, in the Vanguard Union Hospital. She grew up in the Hamlet of Pambrun, SK with her parents and siblings. She married George Williamson on June 7th, 1946, they lived in the Williamson yard with George’s Parents, Brothers, and their families near Pambrun, SK. They raised their 6 children on the farm and in 1967 moved to Swift Current, Sk. She lived many places including Lac Pelletier, Vanguard, Lafleche, and wintered in Pharr, Texas. She is Survived by Her Children Joan (Dwight) L’Heureux, Donna Williamson, Ross (Annette) Williamson, Tom (Helen) Williamson and Lori (Ian) Fraser, Her 20 Grandchildren and their spouses, 36 Great Grandchildren and 1 Great-Great Grandchild. Her sister Rita Jaster and her sister-in-law Joan Williamson. She also is survived by numerous Nephews and Nieces that she loved very much.

She is predeceased by Her Daughter Glenda and Son-in-Law Bill Kehoe, Her Parents Archie and Ella Ross, Her Brothers Claire, Glenn, and Don, Her sister Jeanne, Her Brother-in-law Bob Jaster. Her Ex-Husband George, his parents and Brother and Sisters.

Lorraine was very involved in the farm and GM Williamson Seeds. One of her major projects was leaf cutter bees. She was a forerunner of “Women’s Lib” and ran the family finances which she learnt from her mom. She taught kindergarten for a short period as well. She was very active in community groups and any sports teams her children were involved in. Lorraine enjoyed entertaining family and friends. She always had extra bodies at the dinner or supper table. She hosted her children and grandchildren every summer at Lac Pelletier where they still love gathering at to this day. Some of her favorite things were crop tours with her boys or a road trip with her girls. She loved playing cards and was very active in Club 50 in Lafleche.

A private family memorial will be held later. In Lieu of flowers the family is asking for a Memorial donation be made either to the Pambrun Community Coop Association (Pambrun Hall) c/o Linda Wall, Pambrun, SK, S0N 1W0 or Lafleche Club 50, PO Box 501, Lafleche, SK, S0H 2K0. Arrangements are in care of Parkside Memorial Funeral Home – Ryan Cappelle & Hayden Cappelle.

Death is not extinguishing the light; it is only putting out the lamp because the dawn has come. ~Rabindranath Tagore

To plant a beautiful memorial tree in memory of Lorraine Williamson, please visit our Tree Store

A Memorial Tree was planted for Lorraine
We are deeply sorry for your loss ~ the staff at Parkside Memorial Funeral Home
Join in honoring their life - plant a memorial tree
Services for Lorraine Williamson
There are no events scheduled. You can still show your support by planting a tree in memory of Lorraine Williamson.
Plant a tree in memory of Lorraine

Share Your Memory of
Lorraine
Upload Your Memory View All Memories
Be the first to upload a memory!
Share A Memory
Plant a Tree