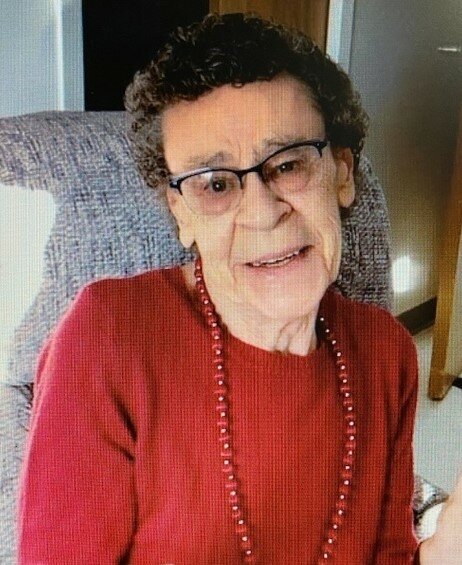 Please share a memory of Anita to include in a keepsake book for family and friends.
View Tribute Book

THIESSEN – Anita Louise It is with a deep sense of sadness and loss that we announce the peaceful passing of our beloved mother, grandmother, and great grandmother, Anita L. Thiessen (Nee Dombrowsky), on Saturday, December 18, 2021, at the age of 90 years, surrounded by her children at the Cypress Regional Hospital in Swift Current, Saskatchewan.

Anita was born August 28, 1931, on the farm at Neidpath, Sask, to Abram and Margaret Dombrowsky (Rempel), and was the second of 3 children, Victor and Marlyn being her brother and sister.

Anita was raised on the family farm near Neidpath, Sask, and after graduating from Grade Twelve, started a job with the Royal Bank in rural Sask. She then took a position at the Royal Bank in Morse where she met her future husband of 56 years, Leonard Thiessen. They were married Oct 5, 1952, and in November the following year were blessed with a daughter Lois, thereby ending her banking career. While working at the Morse branch, she became lifelong friends with Frieda Becker, and later her husband Fred, and the four of them were frequent travel companions when they got older. When Leonard started working for the Pioneer Grain Company as an elevator agent, they moved to Calderbank. From there, he got transferred to McMahon, Saskatchewan, where Ronald and Robert were born. In 1960, another transfer, this time to Osler, Sask., where Barry was born.

In 1965, another move and this time to the farm living they always craved and dreamed about. She worked hard as his farming partner, and assisted with whatever was needed, from morning milking chores, pulling newborn baby calves, pitching haybales, fencing, gardening, and cooking. She loved the animals, and the highlights of her time at Prairie Wind Estates were the Pet Therapy days, and the trip to the Itty Bitty Ranch, close to Morse, where she could hold, cuddle or pet the animals. No one who ever showed up to her home for a meal or a coffee, was turned away, and they never left hungry. She was the proverbial hostess. But it was her love for her children and grandchildren and great grandchildren, and her interest in all they did and continue to do that was her mainstay. She never forgot a birthday!! She was a born mom, and always more concerned about everyone else before herself. Even hours before her passing, she told her children to go home and get some rest, and now she is at rest. Mom (grandma) will be so missed for her boundless words of wisdom and encouragement in all endeavors that were taken by her children & grandchildren. A note to her life long love that was found in her jewellery box said, “Time goes by so slowly, I hunger for your love, I glance at the moon at night, and see you smile from above, Till we meet again, With God’s help, we’ll carry on”.

At Anita’s request, a private family graveside service will be held on Wednesday, December 22, 2021 at the Herbert Cemetery, Herbert, SK. Donations in moms’ memory can be made t:  Prairie Wind Estate Inc., P.O. Box 10, Herbert, Sask. S0H 2A0 or your local Salvation Army, both of which mom and dad were great supporters of.

To plant a beautiful memorial tree in memory of Anita Thiessen, please visit our Tree Store

Look inside to read what others have shared
Family and friends are coming together online to create a special keepsake. Every memory left on the online obituary will be automatically included in this book.
View Tribute Book
Services for Anita Thiessen
There are no events scheduled. You can still show your support by planting a tree in memory of Anita Thiessen.
Plant a tree in memory of Anita

Share Your Memory of
Anita
Upload Your Memory View All Memories
Be the first to upload a memory!
Share A Memory
Plant a Tree