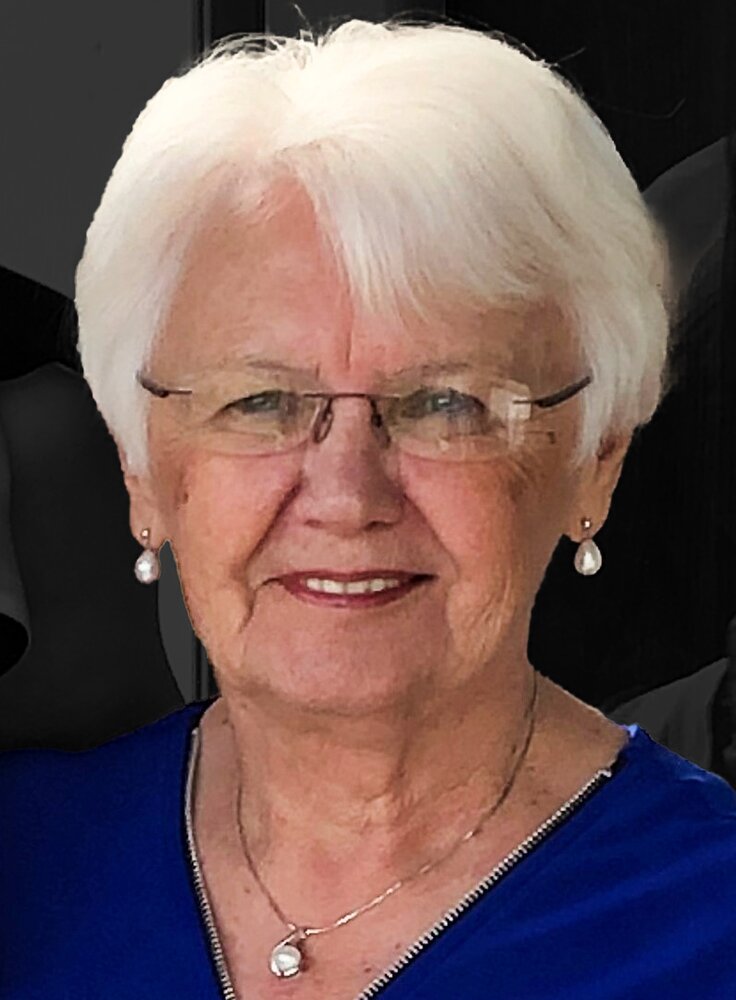 Please share a memory of Josephine to include in a keepsake book for family and friends.
View Tribute Book

Josephine, the fifth child of Abram and Anna Brown, was born August 13,1934 in Beechy, Saskatchewan.  Shortly after her birth, she and her family moved to Rhineland and then McMahon, where she spent her formative years.  Her father was the John Deere dealer for the area, and, when not attending school, Josephine worked in the business with her father.  She adeptly and efficiently found the parts customers requested and felt quite at home in the shop.  In 1952 she moved to Regina and found employment with the Bank of Nova Scotia.  While she was in Regina, John Penner requested her hand in marriage. On July 11, 1953 the young couple wed in McMahon and started their life together in that community, where John was the teacher.  From McMahon, John and Josephine moved to Eastend; during their two years here they made many lifelong friends.  From Eastend, the young couple moved to Swift Current; after a brief stay in Swift Current, Saskatoon became home for a year and half as John pursued his post-secondary education, earning his Bachelor of Education degree.  In 1960 John and Josephine returned to Swift Current, and they were part of the Swift Current community for the next 53 years.  Josephine fully supported her husband’s efforts to advance his post-secondary education, and for numerous summers the couple trekked to Saskatoon in order for John to attend summer school to earn his Bachelor of Arts degree.  Josephine contributed significantly to the well-being of her family as an efficient and competent homemaker and a skilled seamstress.  She also secured employment outside the home, working in retail establishments such as Woolworth’s and Sears and later as a receptionist for Cypress Hills Community College in Swift Current.

Josephine enjoyed several hobbies such as paper tole, petit point, and sewing and offered classes throughout southwestern Saskatchewan on paper tole and drapery making.  She also enjoyed travelling throughout our great country, tenting in western Canada, travelling to Yukon with a camper, and driving to the Maritimes with a motorhome.  For several winters she and John travelled to Hawaii for sojourns in the sun.  They also spent time in Europe, enjoyed a Mexican cruise, and on a whim decided a road trip to the Yellowknife, Northwest Territories would be fun.

Josephine stalwartly supported her husband in all endeavours, and particularly enjoyed the time they spent in Regina when he served as the Member of the Legislative Assembly for Swift Current and a Minister of the Crown in 1991–1994.  She became a voracious consumer of the news and an avid watcher of the political machinations as they were broadcast on the television.

Family was very important to Josephine.  She spent a great deal of time with her parents, particularly as they aged.  She was a steadfast and loyal partner to her husband of nearly 50 years, John, and she was a role model for her daughters, Maxine and Sheila.  She tenaciously and ferociously defended and cared for her loved ones.  A sustaining force in her life was her faith, especially when she had to cope with the sudden passing of her husband in 2003.

Josephine embarked on a new adventure in 2013 when she moved to Regina.  She had many fond memories of the city when she lived there as a young woman, and as a senior citizen she established a new set of memories with new friends and new experiences.

July 28, 2020 marked the beginning of yet another chapter in Josephine’s life.  She was diagnosed with lung cancer, a diagnosis she stoically and bravely accepted; she pragmatically navigated the various challenges the cancer presented and did not see death as something to be feared, but as a gateway to rejoining her husband in heaven.

To send flowers to the family or plant a tree in memory of Josephine Penner, please visit Tribute Store
Thursday
2
December

Share Your Memory of
Josephine
Upload Your Memory View All Memories
Be the first to upload a memory!
Share A Memory
Send Flowers
Plant a Tree