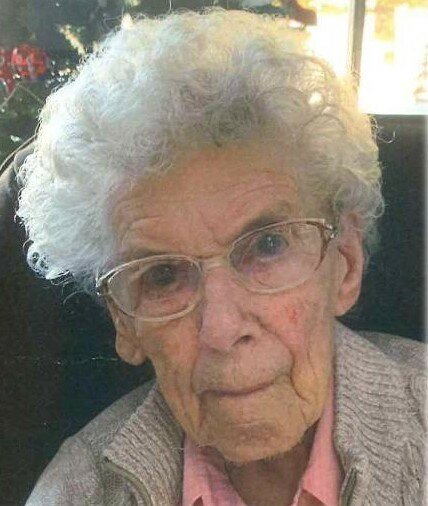 Please share a memory of Vi to include in a keepsake book for family and friends.
View Tribute Book

Benn - Violet Eva died October 18, 2021 a week shy of 102 years of age.  Born Violet Stevens on October 24, 1919 in Maple Creek, Saskatchewan, was the only daughter of Len and Violet May Stevens (nee Hill).  Vi married George Benn on October 30, 1940 and lived in numerous locations in southwest Saskatchewan including Hazlet, Swift Current, Mossbank, Shaunavon and following the death of her husband in March 2001 she settled in southeast Saskatchewan at Fillmore and finally as a resident of the Fillmore Health Center. In addition to her parents she was predeceased by four brothers, George, Eddie, Les and Frank.  She is survived by her fifth brother John, her daughter Elaine Driver of Fillmore and son Warren of Centennial Colorado. Vi was always active in her community and was the first manager of the Hazlet Credit Union.  She loved camping at the Landing and was an excellent fisherwoman.  She will be missed dearly by her family.  Her ashes will be interred at a future date in the Mount Pleasant Cemetery in Swift Current alongside her husband.  Memorials can be sent to FHC Residents Fund in Fillmore.  Funeral arrangements are in care of Parkside Memorial Funeral Home – Ryan Cappelle & Hayden Cappelle.

To plant a beautiful memorial tree in memory of Vi Benn, please visit our Tree Store

Look inside to read what others have shared
Family and friends are coming together online to create a special keepsake. Every memory left on the online obituary will be automatically included in this book.
View Tribute Book
Services for Vi Benn
There are no events scheduled. You can still show your support by planting a tree in memory of Vi Benn.
Plant a tree in memory of Vi

Share Your Memory of
Vi
Upload Your Memory View All Memories
Be the first to upload a memory!
Share A Memory
Plant a Tree