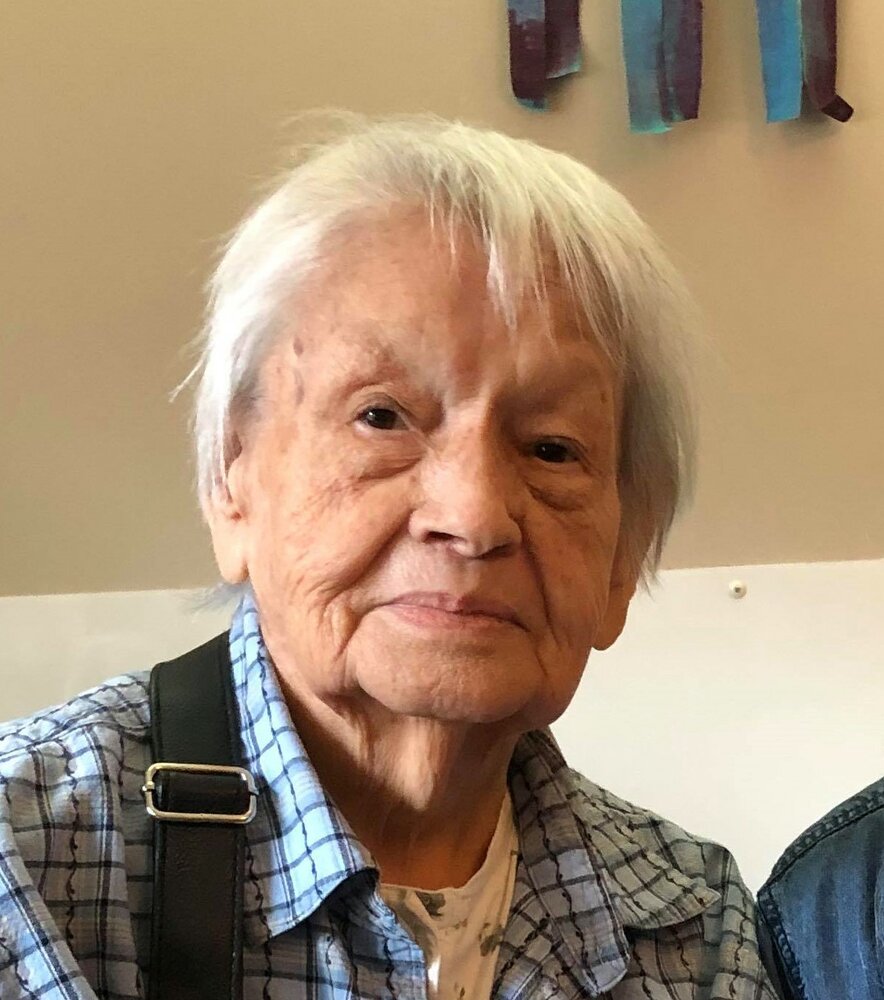 Please share a memory of Doris to include in a keepsake book for family and friends.
View Tribute Book

Doris grew up in Duck Lake and Prince Albert. Being the second oldest of 15 children, she helped her mother when her father served in WWII with both the household chores and looking after her younger siblings. She especially enjoyed those times she was able to spend with her grandmother Almire (Paul) Lafond. When she was able to earn extra income for her family, she worked at the local restaurant helping in the kitchen, and with housekeeping.  When there was a little extra, she loved to go to the theatre and watch movies for 5 cents. She enjoyed outdoor activities like skating, skiing, and camping. She managed to save enough money to buy herself a set a skis and a bike. Her brothers George and Leonard tended to ‘borrow’ her things without her permission and unfortunately broke her new cross-country skis attempting to ski jump with them. She was quite happy when her parents made ‘the boys’ do laundry as their punishment. It was a good thing she loved her siblings and was quick to forgive.

In 1948 Doris had her first child, Rosalie Ellen (Marlene) with Walter Ferguson, a WWII veteran. Their relationship was short-lived, and Doris and her daughter lived with her parents for a few years before they moved to the Sibbald area, and she married Norbert Wenzel in 1953. The transition from always living in town to living on a farm 15 miles from town and 2-1/2 miles to the nearest neighbour wasn’t an easy one although Marlene loved the farm and thrived under the love of her stepfather.

Thanks to the guidance and support of her neighbours including, Annie Smigelski and Lena Dyback, she was able to learn how to make the traditional old-country recipes that the Wenzel’s have loved for years. Annie was also instrumental in teaching Doris how to drive, and Joyce Prysiazny helped her raise and butcher poultry. With the support of these lovely ladies and her many Wenzel in-laws Doris successfully managed the role of a farm wife and raising a family. She milked cows, raised chickens, and helped foster calves and other farm animals as needed. In addition to her contribution to the farm, she grew a large garden, canned, and pickled all that she could, sewed and mended clothes for her growing and hard-working family and somehow found time to earn extra income by sharing her exceptional sewing skills with others in the community. Even in the lean years, she always found a way to make Christmas extra special for her family and friends.

After Norbert passed away in 2002, Doris left the Oyen area and moved to Herbert, Saskatchewan. Her daughter Dale and husband Brian moved to nearby Morse, and when Doris saw a home for sale that seemed just right for her there, she too moved to Morse and her son Bryon followed. Marlene and her partner Al also moved there and built a home. Doris appreciated having so many of her family nearby where she could keep a watchful and caring eye upon them. In recent years after the loss of her daughters Dale and Marlene, she was finding it more difficult to manage her home on her own and she moved in with her daughter Lorie in Regina before her health deteriorated further and she moved into Herbert Long Term Care.

She was loving and kind and extremely loyal to all her family. Her grandchildren and great-grandchildren always held a special place in her heart. She found time to read to them, taught them to bake, cook, and even sew if they let her and especially enjoyed watching animated movies with them.

She loved to bake and cook for family, read, sew, and watch tv. Her favourite shows were Heartland, Heartbeat, Hallmark movies, and most recently Outlander although she preferred the books. She had read all eight of the Outlander books and was looking forward to the release of the final book in the series. Her life was spent quietly and with family when she could, and she added something to every person’s life that knew her.

The family wishes to express their heartfelt gratitude for the care provided to Doris by Dr. Kassett and her many other medical specialists, caregivers, and all the staff at Herbert Integrated Health Care Centre in Herbert, Saskatchewan.

At her request, Doris was cremated and there will be no funeral service. An interment and memorial service will take place in 2022 in Sibbald and Oyen, Alberta.

To plant a beautiful memorial tree in memory of Doris Wenzel, please visit our Tree Store

Look inside to read what others have shared
Family and friends are coming together online to create a special keepsake. Every memory left on the online obituary will be automatically included in this book.
View Tribute Book
Services for Doris Wenzel
There are no events scheduled. You can still show your support by planting a tree in memory of Doris Wenzel.
Plant a tree in memory of Doris

Share Your Memory of
Doris
Upload Your Memory View All Memories
Be the first to upload a memory!
Share A Memory
Plant a Tree