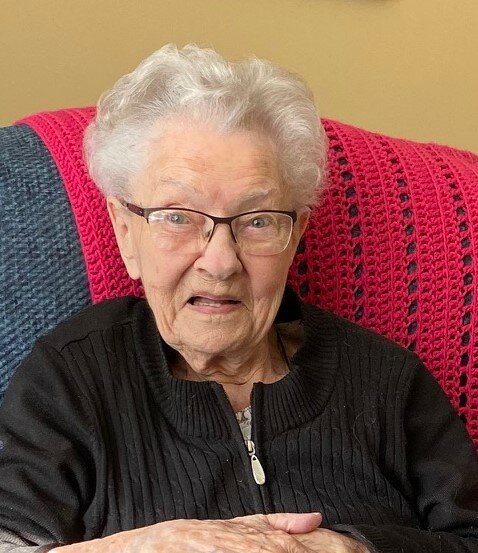 Please share a memory of Margaret to include in a keepsake book for family and friends.
View Tribute Book

WALL – Margaret or Marge as the family called her, passed away on Saturday, October 9, 2021, at Cypress House with her niece Maureen Shelstad, her dear friend Marlene McBlain and several of the amazing staff at her side.  Marge was born on January 26, 1927, in Swift Current, SK to Charles & Helen Butcher.  She grew up on the Butcher family farm at Dunelm and completed her high school education at the Swift Current Collegiate.  Although she lived in a room by herself during this time, she made many friends and often spoke of how kind the Humbles were, treating her as one of their own.  After high school Marge remained in Swift Current and was employed at the Bank of Montreal.  She lived in a small apartment above Christie Grants until she met and married Clarence Wall and moved to the family farm.  Marge and Clarence were quite a team in every way.  They worked side by side on the farm on the farm and did everything together.  In the winter they often moved to town and Marge would work at the Research station.  In later years they purchased a home in Swift Current close to Elmwood Golf Course where they both became member and joined a bowling league.  It was a great area for scenic walks which Marge loved.  She joined TOPS and was so proud of maintaining her weight for many years.  She was concerned about her weight even to the end when it was only 98 lbs.  Marge loved to read novels, play solitaire and do seek-a-word puzzles.  Marge was a caregiver by nature and would have made a great nurse.  She took care of her parents for many years, her siblings, in-laws, and anyone who needed her.  When Clarence was diagnosed with Macular Degeneration and eventually lost most of his sight, Marge was by his side every step of the way.  She enjoyed many hobbies as well as gardening and sewing.  Anyone who visited her in the last few years did not leave without one of her lovingly crocheted blankets in their possession.  She created the most amazing petit point and needlework which was displayed in their home and later at Cypress House.  She grew beautiful roses and loved to receive them as a gift.  Her garden at the farm was huge with lots of raspberries.  Marge & Clarence loved to travel and took several bus tours as well as enjoyed a visit to Hawaii.  They purchased a property in Mesa, Arizona where they spent their winters until Clarence’s eyesight failed.  They traveled often to BC to visit Wall relatives and they enjoyed northern fishing trips.  They were very generous to both family and friends who needed any kind of assistance whether that be in the form of personal or financial support.  Marge & Clarence were strong believers in supporting the community.  They would approach an organization to inquire what was needed and they would cover the cost.  Some of their favorite organizations were the Dr. Noble Irwin Regional Healthcare Foundation, SaskAbilities and the United Church.  To honour their generosity and support over the many years, their niece Maureen Shelstad will establish a Wall-Shelstad Scholarship at the Swift Current Comp for students who require financial assistance to attend post-secondary education of any kind.  Donations can be made to the scholarship fund or to the charity of the donor’s choice.  Marge was predeceased by her husband Clarence Wall, her parents Charles & Helen Butcher; sisters Franny, Pat, and Hilda; brothers Orlando, Charles, and Marshall as well as her Wall in-laws Esther & Jack Dyck, Ernie & Ina Walll, Hilda & Ivan Shelstad, Margaret & Percy Knutson, and many others.  Marge is survived by numerous nieces, nephews and their descendants who were all truly blessed to have had her in their lives.  Her passing leaves an empty space in the hearts of many including the kind and supportive staff at Cypress House who cared for her and mourn her loss as family.  A private family graveside service will be held on Saturday, October 16, 2021.  Arrangements are in care of Parkside Memorial Funeral Home – Ryan Cappelle & Hayden Cappelle.

To plant a beautiful memorial tree in memory of Margaret Wall, please visit our Tree Store

Look inside to read what others have shared
Family and friends are coming together online to create a special keepsake. Every memory left on the online obituary will be automatically included in this book.
View Tribute Book
Services for Margaret Wall
There are no events scheduled. You can still show your support by planting a tree in memory of Margaret Wall.
Plant a tree in memory of Margaret