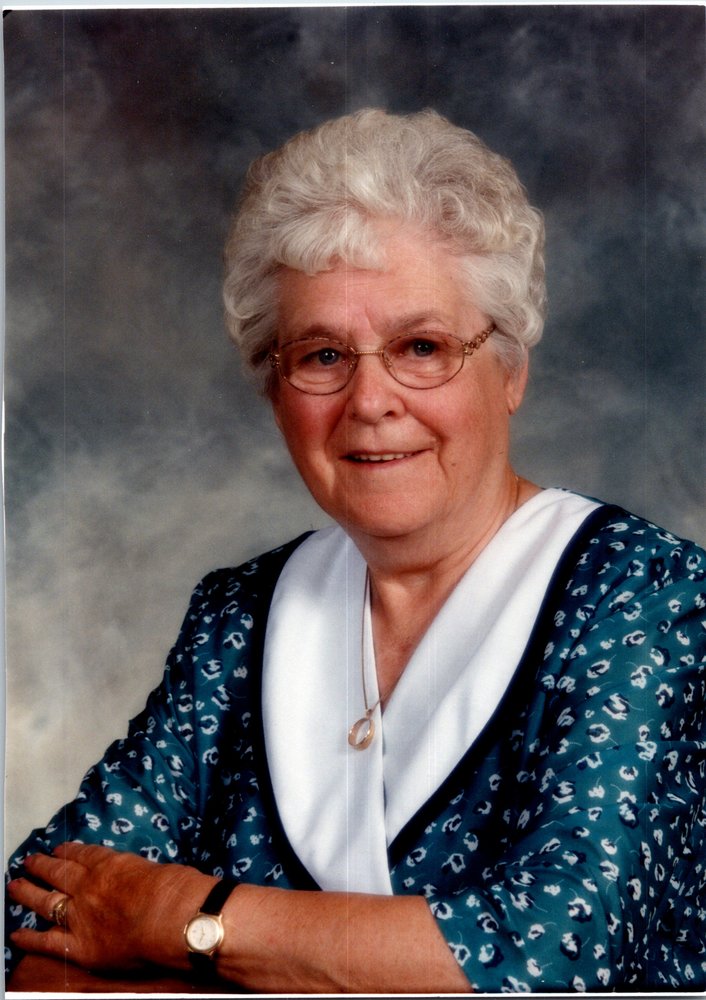 Please share a memory of Martha to include in a keepsake book for family and friends.
View Tribute Book

Martha Katrene Wall, 93 years, resident of Swift Current, SK passed away on January 24, 2021 at The Meadows Care Facility, Swift Current, SK. Members of her family were with her at bedside as she gently slipped away into the welcoming arms of her Savior.  Martha was born to Cornelius and Anna Klassen on the family’s farm northwest of Herbert, SK on August 4, 1927.  She received her education at Rockside School and was baptized upon her confession of faith at the General Conference Mennonite Church in Herbert, SK on August 15, 1948.  Her marriage to David Wall of Springfeldt, SK on April 29, 1951 was blessed with five children and five treasured grandchildren.  Martha was a dedicated and much-adored wife and a devoted homemaker who was known for her wonderful meals at family gatherings from Christmas dinners to boxed picnic lunches in the summer.  Family favorites included her soups - especially summer borscht, her baking – most notably her dinner rolls and cinnamon buns; but everyone knew they were being given special attention when she served her Best Dessert – the infamous Prairie Flapper Pie.   Martha was an active member in the Emmaus Mennonite Church, Wymark, SK where she taught Sunday school for over a decade and contributed to cooking/baking, sewing and other projects through the Ladies’ Mission Club.  After being a full-time partner on the family farm in the Wymark area for many years, Martha, together with Dave, retired to Swift Current SK. in July, 1987.  Martha continued to enjoy growing her vegetable gardens and tending to her beautiful flower beds. She enjoyed sewing, knitting, cross stitch, quilting and many other crafts that she gifted to her children and her grandchildren. She provided loving in-home care to her husband, Dave, for several years before his passing. Martha was a devoted grandmother providing child care and so many fun activities including trips to parks, shopping, berry-picking picnics and birthday parties when her grandchildren – both near and far – spent memory-filled summer vacations with her.  Martha is survived by her children Leslie - Saskatoon, SK, Sidney -Swift Current, SK, Thelma (John Butler) - Fair Oaks, CA, Marilyn (Jim Gerhart) - Moose Jaw, SK, and Russell (Lois) -Springfeldt, SK and grandchildren  Michael Gerhart - San Antonio, TX, Allyson Gerhart - Kindersley, SK, Andrea (Kelton Braun) - Saskatoon, SK, Andrew Butler - Fair Oaks, CA and Logan Wall - Wymark, SK.  She is survived by her sister Nellie (John Penner), Swift Current SK. and numerous nieces and nephews in the Klassen/Wall families.  Martha was predeceased by her husband (David Wall) on March 14, 1998; her parents - Cornelius Klassen on January 4, 1950 and Anna Klassen on December 28, 1980.  As well, Martha was predeceased by brothers and sisters-in-law including Peter (Kay), Edward (Mary), Irvin (Anne), Daniel, Elmer (Ann), Victor (Alma) and Laurent (Isabelle) as well as sisters and brothers-in-laws including Anne (Neil Tilitsky), Amanda (Bernard Giesbrecht), Eva (Jacob Martens) and Bertha (Milton Leischner) as well as numerous brothers-in-law and sisters-in-law on the Wall side of the family.  A family funeral was held on Thursday, January 28th at 2:00 pm from Zion Mennonite Church, Swift Current SK. Rev. Lois Bukar, pastor of the Zion Mennonite Church, Swift Current SK. will officiate and provide a message of comfort.  Pallbearers are: Logan Wall, Kelton Braun and Kyran Bussiere, Lloyd Klassen, Ken Klassen and Kevin Klassen.  Interment will take place at Mount Pleasant Burial Park, Swift Current SK. In memory of our mother, the family will graciously recognize donations to The Canadian Diabetes Association.  Arrangements are by Parkside Funeral Home.  For further information please call 1-306-773-2931 or visit www.parksidefuneralhome.com to be included in our Book of Condolences.

CLICK ON THE FOLLOWING LINK TO WATCH THE SERVICE LIVE  https://boxcast.tv/view/martha-wall-funeral-service-849228

To send flowers to the family or plant a tree in memory of Martha Wall, please visit Tribute Store
Thursday
28
January

Share Your Memory of
Martha
Upload Your Memory View All Memories
Be the first to upload a memory!
Share A Memory
Send Flowers
Plant a Tree