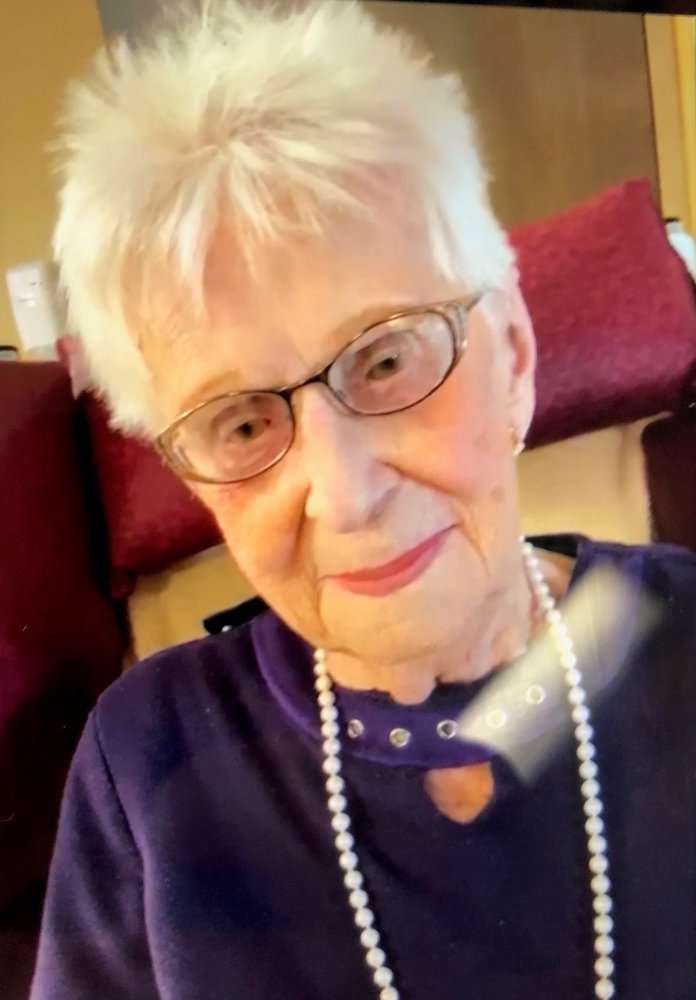 Please share a memory of Mary to include in a keepsake book for family and friends.
View Tribute Book
HOWDEN – Mary Ann (nee Williamson) – March 24, 1921 – July 29, 2020 - passed away at the age of 99 at The Meadows Long Term Care Facility, Swift Current, SK. Mary Ann is predeceased by her husband David, son Lloyd and his wife Rose, parents George and Mary Williamson, brothers Arnold, Bill, Henry and sisters Virginia and Rose. She is survived by her children Rita (Ron) Toth of Airdrie, AB, and children Rodney, Leslie and Dwayne; Gloria (Don) Dreher of Central Saanich, BC, and son Michael; Ron (Lynn) Howden, Swift Current, SK, and children Gayle and Steven; daughter-in-law Janice Howden, Saskatoon, SK and Lloyd’s children Christina and Jason; Doug (Karen) Howden, Regina, SK and children David and Brandy; Bonnie (Paul) Staats, Regina, SK and children Stacey and Shannon and her sister Verena Williamson, Swift Current, SK and numerous great grandchildren, nieces and nephews. Mary Ann was born in Kaukauna, Wisconsin, U.S.A. and her family moved to Canada when she was a young child. She grew up on the family farm north of Swift Current and was the middle child of seven. She attended Belvidere School near their farm. Mary Ann married David Elmer Howden August 18, 1942 and had 45 years together before his death on July 29, 1987 from cancer and as she was in their marriage she was by his side throughout his illness. It was a testament to their love and marriage that David was there to take MaryAnn’s hand on the same date that he passed away so many years before. They raised their six children on a farm north east of Swift Current. Mary Ann grew up during the dirty 30’s and learned well the lessons and values of making the best of everything you had. You threw nothing away that could be used on another day. You spent your money wisely and you preserved all that you could grow and raise on the farm. She sold honey from their bees, cream from their cows, eggs from their chickens and asparagus from the garden. Mary Ann understood hard work being a farm wife helping in the fields, working with the animals, growing a very very large vegetable garden, in which she took great pride and tended a flower garden that attracted the most beautiful hummingbirds year after year. They retired from farming in 1980 and moved into Swift Current but were never far away if help was needed on the farm. Mary Ann kept the cleanest house and was always a loving and involved mother, attending to everyone’s needs. MaryAnn was very artistic and passed all of her hobbies onto her children from exquisite petit point creations to her many crocheted projects. She spent countless hours perfecting her crafts. Marianne had one desire for her family and friends, that they would remember the best times they had spent together. She loved her community; she loved her church which she attended faithfully for years until it became physically impossible but would attend services offered at The Meadows. She was a lifetime member, 60 years, of the CWL. Mary Ann was loved beyond words. Her life was a blessing and her memory will be treasured by all who knew her. A very special mention to her friends and to the exceptional staff at The Meadows, House #1 who were her “daily family” and filled the last two years of her life with love and kindness. Mary Ann was laid to rest on July 31, 2020 beside her husband David at Memory Gardens Cemetery. A special mention goes out to Ryan and staff of Parkside Funeral Home who made our little COVID-19 service as perfect as it could be. Funeral arrangements are in care of Parkside Memorial Funeral Home – Ryan Cappelle.
To send flowers to the family or plant a tree in memory of Mary Howden, please visit Tribute Store
Friday
31
July