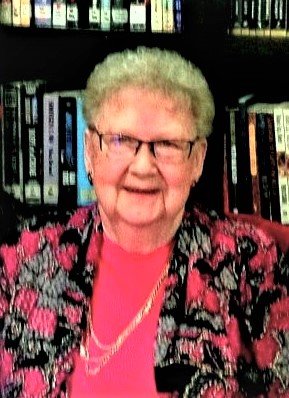 Please share a memory of Edna to include in a keepsake book for family and friends.
View Tribute Book
MACRAE – EDNA – It is with great sadness that the family of Edna MacRae (nee Beisel) announce her passing on Monday, April 20, 2020 at the Cypress Regional Hospital. A memorial service will be held at a later date due to Covid-19 restrictions. Edna was born in Rush Lake, SK on September 8, 1931 to David and Amelia Beisel. Edna is survived by her brother Hubert (Ann), sister-in-law Esther, her 3 daughters, Sheila (Craig), Theresa (Nelson) and Valerie (Clarence); grandchildren Tyler (Heather), Megan (Scott), Tammy (Doug), Kendra (Mark), Shania and Sierra; great-grandchildren Dreyden, Austin, Jay, Sage, Niko, Austyn, Ryley and numerous nieces and nephews. She is predeceased by her husband Don MacRae, her parents David and Amelia Beisel, brothers Dave (Molly), Ed (Elsie), Clarence, Sam (Betty) and Ruben. She is also predeceased by her sisters Rachel (Mike) and Lil (Abe). After attending school in Rush Lake Edna moved to Swift Current where she worked as a cook at the Research Station. She would often share her memories of the great times she had with friends on and off the job. This is where she met Don MacRae and eventually they were married on April 2, 1954. Don and Edna moved to Eastend, SK where they bought into the Massey Ferguson Dealership. Edna worked as a cook at Eastend Cypress Hotel for a short time and then was hired as head cook when the Wolf Willow Lodge opened. She was also involved with the Kinette Club and curled for many years. In 1974 Don and Edna moved to Swift Current where she worked as a Psych attendant for about 15 years at the Swift Current Union Hospital. After retiring she enjoyed spending time with her family. After Don passed away in July of 2008 Edna moved into the Riverview Village Estates and happily resided there until her passing. Donations in Edna’s memory can be made to the Dr. Noble Irwin Healthcare Foundation or to Riverview Village Estates. For further information or to sign the family book of condolence, visit www.parksidefuneralhome.com Arrangements are in care of Parkside Memorial Funeral Home – Ryan Cappelle & Hayden Cappelle.
To plant a beautiful memorial tree in memory of Edna MacRae, please visit our Tree Store

Look inside to read what others have shared
Family and friends are coming together online to create a special keepsake. Every memory left on the online obituary will be automatically included in this book.
View Tribute Book
Services for Edna MacRae
There are no events scheduled. You can still show your support by planting a tree in memory of Edna MacRae.
Plant a tree in memory of Edna

Share Your Memory of
Edna
Upload Your Memory View All Memories
Be the first to upload a memory!
Share A Memory
Plant a Tree