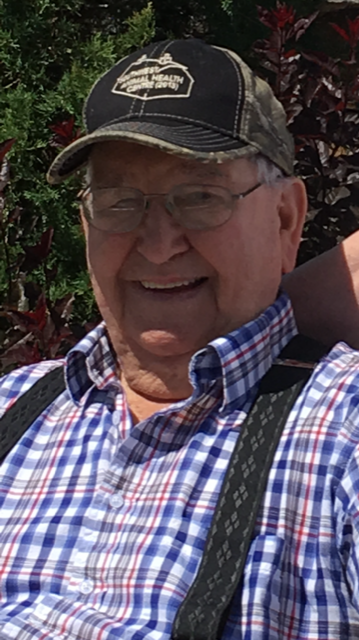 Linder, Leonard Lawrence passed away at The Meadows, in Swift Current on Tuesday, October 9, 2018 at the age of 94.  Leonard was born at Abbey, SK on July 12, 1924.  His school years were spent at Leggot School.

He was a farmer and worked long and hard to become a success at his chosen career.  He took great enjoyment being a Smith Roles agent & traveling the countryside and there were many nights waiting for him to come home to a cold supper!  Music was very important to him and at an age of 15 he played guitar with his two brothers in a family band. From 1972-1982 he joined Lavern Halvorson, Tony Schafer, Ervin Anderson & Max Pederson and "Rythmix" was born in which he played his "Banjo".  October 1982 found Leonard semi-retiring and moving to Cabri.  Within two weeks he was jamming with the Cabri Senior musicians "The Haz Bens" which consisted of Ben Andreas, Harvey Peacock, Buster Trembath, Dora Watson, Gladys Wright & Stan Pederson.  His stroke in 2006 left him with right side hand immobility and music only to be listened to and enjoyed by a tapping hand.  A dream came true Christmas 1992 they took the family & grandkids to Disneyland and he seen such great pleasure watching each and every child at this Fantasyland. Any spare time he managed to find enjoyment with baseball, hockey, curling, snooker and golf and cheered on the Toronto Blue Jays, Toronto Maple Leafs & Saskatchewan Roughriders.

His civic responsibility had him as a member of the Oddfellows Lodge from 1946 until it disbanded.  Member of Sask Wheat Pool for 25 years in which he was secretary for last of those 17 years. Municipal counselor 1977-1982

He is predeceased by his father Ben, mother Ethel, half brothers Percy & Stan; brothers Harold & Gordon and sister Doris.

The family wishes to thank Dr Steenkamp, Dr Garcia and all the staff at The Meadows House 13 & administration staff for their wonderful care & concern for Leonard.  He made a lot of new friends playing & teaching cribbage during his nineteen months residency.  Those wishing to make donations may do so at www.prostatecanada.ca.

To send flowers to the family or plant a tree in memory of Leonard Linder, please visit Tribute Store
Monday
15
October

Share Your Memory of
Leonard
Upload Your Memory View All Memories
Be the first to upload a memory!
Share A Memory
Send Flowers
Plant a Tree