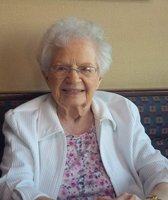 LYNNES – Doris passed away on September 26, 2020 at the Meadows Long Term Care Facility in Swift Current, SK. She was born to Harry and Isabell Lowick on December 27, 1916 in Ontario. She is survived by her sister Elizabeth (Beth) Dyke, her son David and his twin daughters Alicia (Clint), Oliver & Emery; Michelle (Sebastian) Weston; daughter Corinne and children; Kurtis, Glen (Amber), Tayler & Trinity, Regan and his daughter Rylee Lynn. She was predeceased by her husband Herbert Lynnes in 2002; brother Morton Lowick (in WWII), and Marshall Lowick in 2007, daughter-in-law Diane Lynnes (David) in 2008, and brother-in-law Walter Dyke in 2009. Doris was the second of four siblings on a farm in the Fosterton area. She married Herbert Lynnes July 1940. They raised two children. She loved spending time with her five grandchildren and her 6 great grandchildren. She was a very active lady being a hairdresser, was involved in church, the choir and member of the Hospital Auxiliary and Music Festival Association. She loved curling, bowling and watching the Blue Jays and Roughriders. Travelling, camping, playing cards, going to dances and cooking were a large part of her life. She was always dressed to the nines beside Herbert at school functions. A graveside service will be held on Tuesday, September 29, 2020 at 2:00 p.m. at Memory Gardens Cemetery, Swift Current, SK. Donations in memory of Doris can be made to the Meadows Auxiliary, Swift Current, SK. For further information or to sign the family book of condolence, visit www.parksidefuneralhome.com Arrangements are in care of Parkside Memorial Funeral Home – Ryan Cappelle & Hayden Cappelle