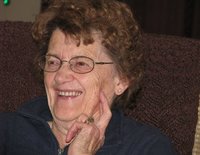 FIRUS - Inez passed away in the early morning hours of October 6, 2019 at the Meadows Care Home with her daughters Pam and Roxanne by her side.  Mom was born to Jacob and Emma Steinley on February 20, 1936 at Herbert Hospital. She was raised on the farm in the Prairie View District.  She attended Turnhill country school, completing grade 11 there and then moved into Swift Current to attend Beatty Collegiate school for Grade 12. After graduation she worked at the telephone office in Swift Current as an operator for 3 years. She then moved to Medicine Hat to take a Commercial Business course.  When she completed her education she moved back to Swift Current and worked for 3 years at the Law Office of Roth, McClelland and Grant. It was during this time that she met Harry Firus at a church picnic and it didn’t take long for them to fall in love. They were married in April of 1962. Their first few years of marriage were spent living on a farm south of Herbert. In 1963 their first daughter Cynthia was born.  In 1965 they moved to a farm west of Herbert and that is where they lived, farmed, and raised their family until retirement.  Their second daughter Pam was born in 1966 and third daughter Roxanne in 1969. Mom was a very busy, hardworking wife and mother. Besides her busy life on the farm, she always had a part-time job, first at the Bank of Montreal in Herbert and then at the Herbert Nursing Home and then the Senior’s home. The work on the farm included hundreds of chickens, cattle and a huge garden.  She loved that life and especially loved her pets there. In 2007 Mom and Dad moved off of the farm and into Swift Current.  After Dad’s passing in 2009, mom made several moves and then eventually ended up with her final move into the Meadows when it opened its doors. That is where she lived, enjoying the care and friendship that she experienced from the special staff there, until the time of her passing.  Mom was an incredibly sweet, funny and loving woman who will be dearly missed by many.  Inez is survived by her daughter Pamela (Tom) Rissling and their children Sydney (Brayden) Deman and great-grandson Porter, Darian (Andrea Vrabie), and Aidan; daughter Roxanne (Wendell) Kehler and their children Justin (Nicole) Kehler, and Samantha; son-in-law Kevin and Trudy Yeske and grandsons Jason (Melaina Sutherland) and Jordan; brother Gerald (Fran) Steinley; numerous nieces and nephews. All of these people were very precious to mom.  She was predeceased by her loving husband Harry, her parents Jake and Emma Steinley, her beautiful daughter Cynthia, and her precious grandson Andrew Kehler along with many other loved ones.  Mom will be deeply missed by her family and friends and will always be lovingly remembered.  A funeral service will be held on Saturday, October 12, 2019 at 2:00 p.m. at St. Olaf Lutheran Church with Dr. Reverend Greg Kiel officiating.  The interment will take place at the Herbert Cemetery, Herbert, SK.  Donations in memory of Inez can be made to St. Olaf Lutheran Church Memorial Fund.