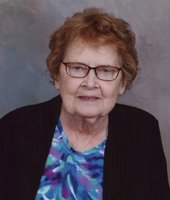 It is with great sadness that we announce the passing of Phyllis Hoshowsky (nee Semesock) on July 6, 2019.  Phyllis was predeceased by her parents John and Katherine Semesock, her brothers Fred, Steve and Nick, her sisters Mary and Anne, and granddaughter Natasha Olsgard. She is survived by her sister Jenny; her daughter Cathy (Dennis), granddaughter Crystal, grandsons Jay (Anita) and Shaun (Renee); daughter Linda (Greg), granddaughters Cara (Nathan), Meghan, and Chantel (Carson); son Rodney (Cheryl), grandsons Bryce (Kara) and Mark; great grandchildren Jiya, Reid, Kinley, Cash, Hudsyn, Talia and Chase.  Phyllis was born in Vanguard on July 19, 1936 to John and Katherine Semesock. She was the youngest of seven children.  She attended most of her school years at Arnold School and then two years of technical school in Moose Jaw. She married Eugene Hoshowsky in 1954 and they farmed in the Glen Bain area. They had three children Cathy, Linda and Rodney.  In 1983 Phyllis moved to Swift Current where she held numerous jobs including the Horseshoe Lodge, Burroughs & Weber and the Swift Current Hospital.  Family was very important to Phyllis and she was blessed with nine grandchildren and seven great grandchildren. She spent a lot of time keeping in touch with her siblings and her nieces and nephews as though they were her own children. Phyllis will be greatly missed by those who experienced her kindness, and her giving nature. Heartfelt thanks to the staff at St. Joseph’s Home in Ponteix and the Meadows Care Home in Swift Current for their amazing kindness and care.  The funeral for Phyllis was held on Wednesday July 10th at 2pm at Christ the Redeemer Catholic Parish 1850 Springs Gate in Swift Current, SK. In lieu of flowers donations can be made to the Christ the Redeemer Catholic Parish Building Fund.